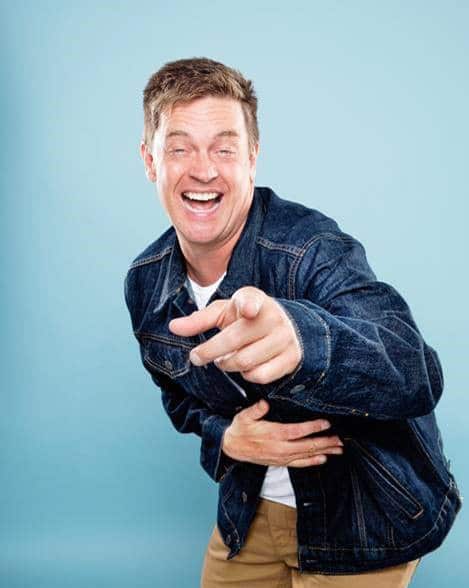 Direct from Comedy Central’s “100 Greatest Standups of All Time”

ABOUT COMEDIAN JIM BREUER: Not long after Jim Breuer did his first official standup gig in Clearwater, Florida, in 1989, industry folks began asking him, “What’s your point of view?” “I don’t know…” He searched for a meaningful response to a ridiculous question. “To make people laugh?”

The freewheeling, New York bred comic storyteller – who made the list of Comedy Central’s “100 Greatest Standups of All Time” – is hotter than ever, a global touring sensation and regular presence on radio and television whose rabid audience, he’s thrilled to note, is filled with “lifetimers.” Once folks see him live, they’re hooked. Breuer estimates that 78% of his fans have seen him “five, six, seven” times. It’s becoming a family thing, with parents even bringing young teens to see the family man and father of three daughters, all providing genius “dad” material for his sets. Having evolved both personally and professionally since the beginning, Breuer’s pleased to say he’s been F-word free for ten years and counting.

Breuer came to national attention during his seasons on Saturday Night Live (1995-98), a rebuilding era whose cast featured Will Ferrell, David Spade and Norm McDonald. But don’t call him “Goat Boy” (one of his characters on SNL) or ask him to do his Joe Pesci impression. Those things are eons ago. Some even still associate him with “Half Baked,” a stoner comedy flick from around that time that starred Dave Chappelle and featured cameos by Willie Nelson, Snoop Dogg and Tommy Chong.

Over the years, Breuer has been something of a multi-media sensation currently appearing alongside Kevin James on “Kevin Can Wait” on CBS as well as popular films “Zookeeper,” “Dick,” “Titan A.E.” and “Beer League”; hosting MTV’s popular “Beach House” and VH1’s “Web Junk 20”; and being featured on “Comedy Jam,” “This Is Not Happening,” “Late Night with Conan O’Brien,” “The Daily Show with Jon Stewart,” “The Late Late Show with Craig Ferguson,” “Jimmy Kimmel Live,” “Late Night with Jimmy Fallon,” and “The Marriage Ref.”

“I’m a deep-rooted family guy with hardcore blue collar roots,” he says. “My father was a World War II vet and my mom lost her first husband to WWII. As a child growing up in Valley Stream, New York, I lived in low income housing, then an attic apartment, to eventually moving down the street into a home of our own, always surrounded by faith and love. My career reached a new level when I started to raise a family of my own and realized I should stick to what I know, what everyone could relate to no matter their socio-economic status. My oldest daughter just went to college and we’ve dealt these past few years with mortality issues, and I’m just there to find the funny in that. It all started with ‘Let’s Clear the Air,’ which focused on me being a new father who came from another world and who wasn’t prepared for the responsibilities at all.”

“My job as a comic is to talk about the many great loves of my life, recognizing that yes, we are all on borrowed time but we can still enjoy life with a passion and not get caught up in all the madness,” Breuer adds. “There are always things that can become an obstacle to our happiness, and the big three for me that I smack into most are divisions in the family, financial struggles and health issues. For me, there’s no better feeling in the world than making someone laugh and knowing that I’ve inspired or healed someone. It’s nice when people tell me I’m funny, but the ones that keep me going are the ones who come up to me and say, ‘Can I just tell you, I just lost my mom, and you healed me. That’s the first time I’ve laughed in ages.’ Or ‘My wife and I were fighting, we just experienced death. We knew seeing you was going to help. Thank you. We needed this so much.’ We’re not here for very long, and we’re all stuck here together. Everybody needs to laugh and be uplifted. We’re here to take care of others. I’m on a mission to lift you in the only way I know how.”

THIS EVENT HAS TWO SHOWTIMES: