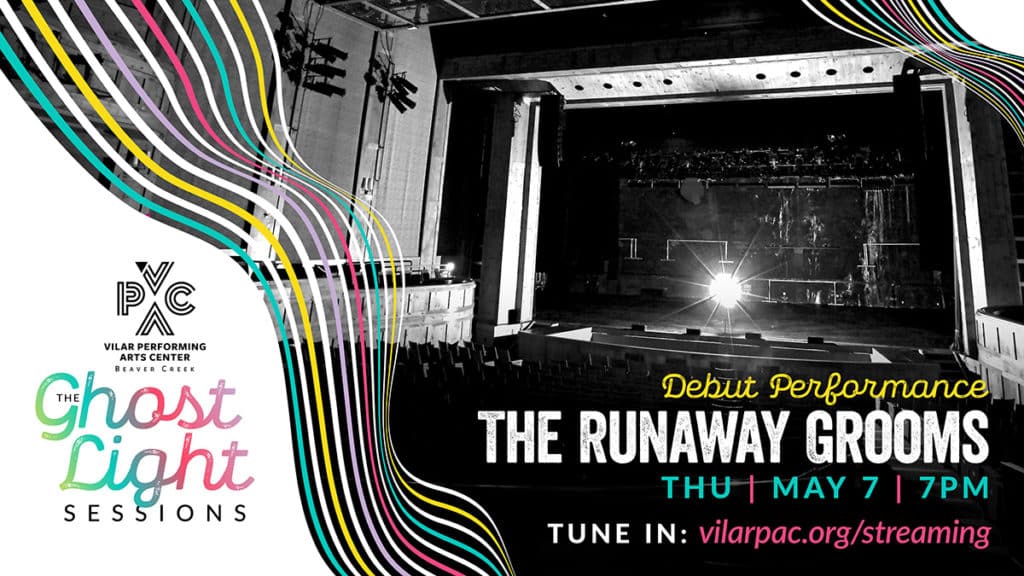 Until we can be together again we are excited to reveal that we’ll start streaming, for free, The Ghost Light Sessions – LIVE from the empty theater! We’ll be hosting local musicians for a free evening of local, streamed music.  Tune in at: www.vilarpac.org/streaming

The series will kick off May 7th at 7pm with The Runaway Grooms.

ABOUT THE BAND: The Runaway Grooms is a five-piece Americana band based in Vail Valley, Colorado. The group started when front man, Adam Tobin, met guitarist, Zac Cialek, at employee housing on the mountain. The two were joined by drummer, Justin Bisset, shortly after and formed the original lineup. The trio moved in together, started gigging up and down the Vail Valley, and began cultivating an extremely loyal fan base.

Bassist/vocalist, Zach Gilliam, and keyboardist, Cody Scott (aka ole strong fingers), joined the band in November 2019 creating an undeniably funky sound that rings deep through the mountain passes. The addition of the new members birthed a new sound for the band and added a tasty flavor that listeners can’t stop raving about.

2019 brought TRG many fortunes including opening for Toots and the Maytals at the Vilar PAC, headlining the infamous Show Down Town Concert Series, and jamming out Avon Performance Pavilion. 2020 brings many great things for the band including their debut LP titled “Tied to the Sun”.  Learn more at: www.therunawaygrooms.com

VIRTUAL TIP JAR will be available: @therunawaygrooms on Venmo

TUNE IN FOR FREE: www.vilarpac.org/streaming

As we patiently await the passing of the current pandemic and figure out how to safely resume operations at our beloved Vilar Performing Arts Center, we feel our duty to fulfill the role of the “ghost light” in our community providing a flow of energy during these uncertain, in-between times. As such we’re introducing “The Ghost Light Sessions” which will allow artists from our region to live-stream performances to wherever you are, direct from our stage. Kicking off the series is a FREE live-stream from The Runaway Grooms who will perform at 7pm on May 7th. If you’re like us, you’re probably bursting for some live entertainment to resume and allow us to reconnect as a community! We also hope it provides our local artists a platform to thrive during these difficult times and encourage you to contribute to their virtual tip-jar as a means to show your support. With enough participation and support we hope to continue this series until we can once again welcome you through our doors and we thank you in advance for spreading the word and supporting this new effort.