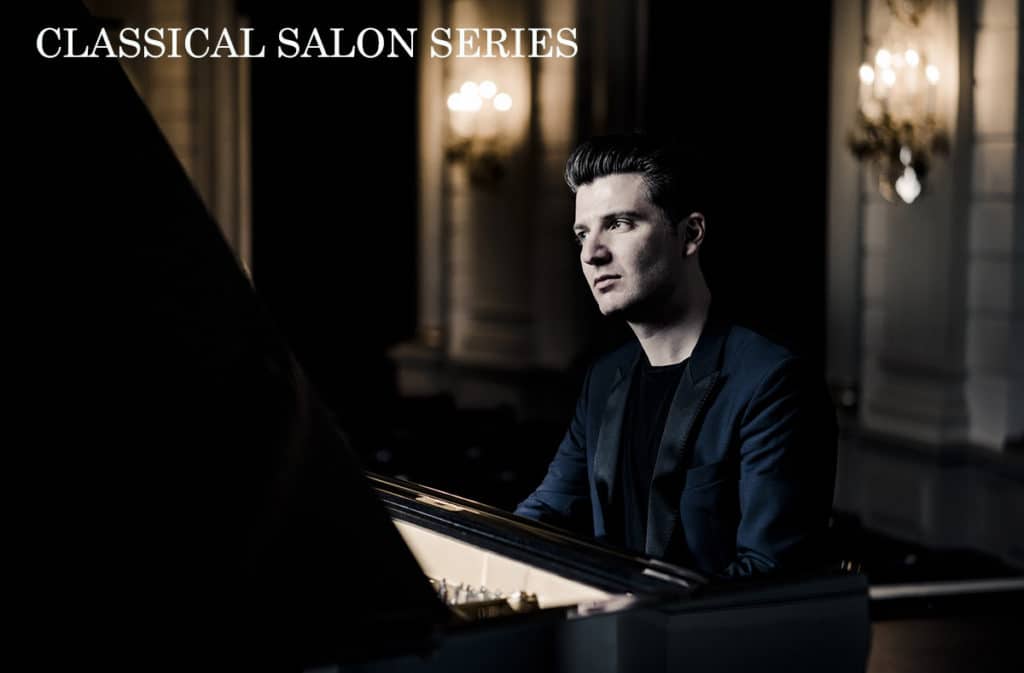 ABOUT ALESSIO BAX: Combining exceptional lyricism and insight with consummate technique, Alessio Bax is without a doubt “among the most remarkable young pianists now before the public” (Gramophone). He catapulted to prominence with First Prize wins at both the Leeds and Hamamatsu International Piano Competitions, and is now a familiar face on five continents, not only as a recitalist and chamber musician, but also as a concerto soloist who has appeared with more than 100 orchestras, including the London, Royal, and St. Petersburg Philharmonic Orchestras, the Boston, Dallas, Sydney, and City of Birmingham Symphony Orchestras, and the NHK Symphony in Japan, collaborating with such eminent conductors as Marin Alsop, Vladimir Ashkenazy, Sir Andrew Davis, Sir Simon Rattle, Yuri Temirkanov, and Jaap van Zweden.

Bax explores many facets of his career in the 2019-20 season. Fall brings the release of Italian Inspirations, his eleventh recording for Signum Classics. Pairing works by Luigi Dallapiccola and Alessandro Marcello with Italian-themed pieces by Rachmaninov and Liszt, the album’s program is also the vehicle for Bax’s solo recital debut at New York’s 92nd Street Y. A further debut follows with the Milwaukee Symphony, where he plays Beethoven’s “Emperor” Concerto under Han-Na Chang, and the same composer’s Fourth Concerto and Choral Fantasy take him to the Santa Barbara Symphony. Placing especial focus on long-term collaborative projects, this season Bax undertakes Beethoven’s complete works for cello and piano at Chamber Music Society of Lincoln Center (CMS) and on a forthcoming Signum Classics release, both with Paul Watkins of the Emerson String Quartet; plays trios in South America with Berlin Philharmonic concertmaster Daishin Kashimoto and French horn virtuoso Radovan Vlatkovic; and embarks on multiple U.S. and European recital tours with superstar violinist Joshua Bell. After headlining the North Carolina Symphony’s season-opening concerts together, Bax and his regular piano partner, Lucille Chung, give duo recitals with CMS, at Atlanta’s Spivey Hall, in the Yale Piano Series, and at Sala São Paulo in Brazil. Bax rounds out the season with a full summer of festivals, highlighted by his third season as Artistic Director of Tuscany’s Incontri in Terra di Siena festival, which is fast becoming a major international destination for music-lovers.

Bax revisited the two concertos heard on Alessio Bax Plays Mozart for his recent debuts with the Boston and Melbourne Symphonies, both with Sir Andrew Davis, and with the Sydney Symphony, which he led himself from the keyboard. Other 2018-19 highlights include the pianist’s Auckland Philharmonia debut, concerts in Israel, a Japanese tour featuring dates with the Tokyo Symphony, U.S. collaborations with Miguel Harth-Bedoya and Edo de Waart, and two solo recitals marking his return to the prestigious Mozarteum Argentino series at Buenos Aires’s Teatro Colón. Recent seasons have also seen Bax make his solo recital debut at London’s Wigmore Hall, which aired live on BBC Radio 3, and give concerts at L.A.’s Disney Hall, Washington’s Kennedy Center, and New York’s Carnegie Hall. In 2009, he was awarded an Avery Fisher Career Grant, and four years later he received both the Andrew Wolf Chamber Music Award and the Lincoln Center Award for Emerging Artists.

Alessio Bax graduated with top honors at the record age of 14 from the conservatory of Bari, his hometown in Italy, where his teacher was Angela Montemurro. He studied in France with Francois-Joël Thiollier and attended the Chigiana Academy in Siena under Joaquín Achúcarro. In 1994 he moved to Dallas to continue his studies with Achúcarro at Southern Methodist University’s Meadows School of the Arts. In fall 2019, Bax joins the piano faculty of Boston’s New England Conservatory. A Steinway artist, he lives in New York City with Lucille Chung and their five-year-old daughter, Mila. Beyond the concert hall he is known for his longtime obsession with fine food; as a 2013 New York Times profile noted, he is not only notorious for hosting “epic” multi-course dinner parties, but often spends his intermissions dreaming of meals to come.