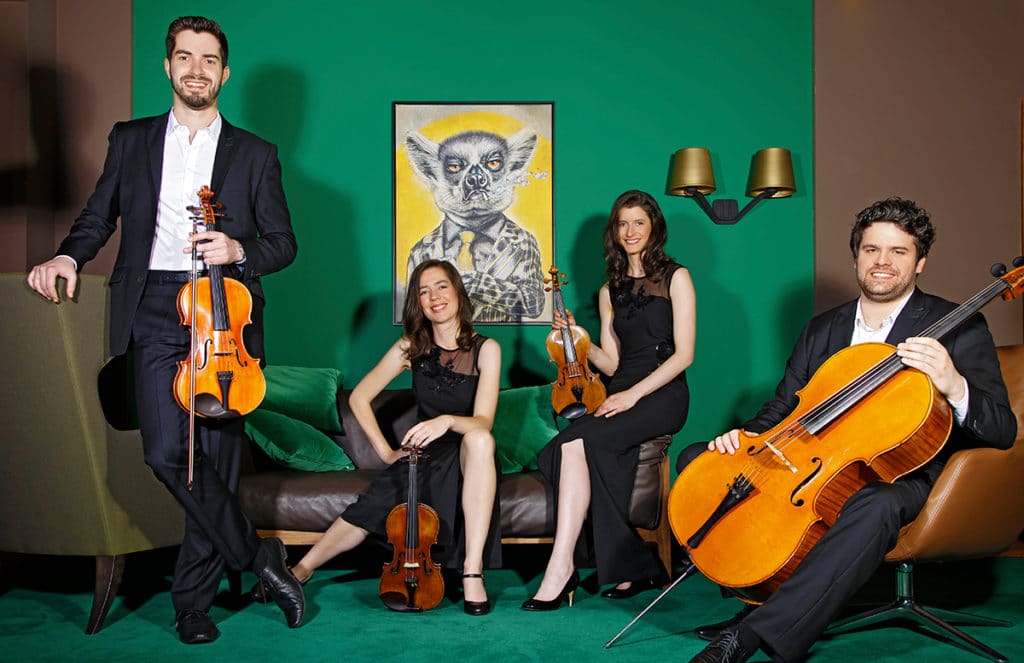 In Europe, the Media and Critics alike are unanimous in their enthusiasm for the young ARIS Quartet, described by the Cultural TV Channel as, “one of the most sensational ensembles of the younger generation,” and NDR Kultur has hailed them, “on the verge of an international career.”

Initially, as purely an experiment, the four musicians were brought together in 2009 at University of Music in Frankfurt. Later their Artistic inspiration came from quartet members of the Artemis, and Alban Berg Quartets.

In 2016, the Aris Quartet not only received one, but 5 prizes at the ARD International Music Competition in Munich and 2 years later were named the BBC NEW Generation Artist, which comes with recording contracts and concerts throughout the UK with engagements in prominent venues and festivals, such as the BBC Proms in August 2019.

The international breakthrough however came shortly after the quartet’s formation, earning first prizes at leading music competitions, including at the International Joseph Joachim Chamber Music Competition in Weimar, Germany in 2016 and at the Jürgen Ponto Foundation prize for chamber music.

As of today, the Aris Quartet has performed already over 500 concerts in Europe alone appearing in the major concert halls and leading music festivals.

During the upcoming seasons the Aris Quartett will have many important Firsts: in Vienna it is the Debut in the Konzerthaus, April 2019 and again in March 2020 as part of the Beethoven Anniversary Year in the world’s prestigious Vienna Konzertverein. then Wigmore Hall which is slated for May 2020 and in the spring 2021 they will embark on their first USA tour with 3 concerts by the San Francisco Chamber Music Society. Further notable engagements are at the Konzerthaus Berlin, Alte Oper Frankfurt, Lieder Halle Stuttgart and a re-invitation to the Schleswig Holstein Festival.

In addition to their homogeneity and technical prowess, the Aris Quartet captivates audiences through their passionate interpretations and ability to communicate easily with audiences. Described by the press as “thrilling”, FONO FORUM; “gripping” Süddeutsche Zeitung; and “finely nuanced and exciting” Frankfurter Allgemeine Zeitung.

The Aris Quartet already has highly-acclaimed and award-winning CD recordings. The fourth CD release on the GENUIN Label in 2018 was a collaboration with Deutschlandfunk, featuring works by Shostakovich and Schubert. The repertoire encompasses a wide range and variety. In addition to the classical literature of Haydn, Beethoven, and Bartók, the musicians also devote themselves to lesser-known works by composers such as Reger, Hindemith, and Zemlinsky.